By The Daily Fracas staff

We are alarmed at the sponsoring of Citizens Bill 2406, the latest anomalous proposal filed by Filipinos For Justice, mandating so-called ‘Kyrie Yoga’ in all classes until K12.

Look at the statistics, they say. Look how well-behaved the kids are, they argue. And who’s to deny health and happiness to our youth in this depressingly famished world? 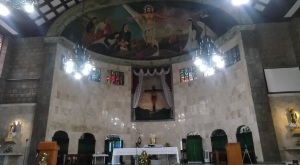 If such a program is to continue, let’s not get it in our heads that such ‘discipline’ is what we need to attain true happiness, like it was some religion of its own. But that’s exactly what they’ve been claiming.

On the surface, the lower recidivism rate makes it look like compassion is at an all-time high, but this is a deceiving figure, much like incarceration of criminals goes down at a bombing site.

The enemy is playing the long game. But contrary to what it wants you to think, what’s most important is not to bring down numbers, but to change hearts.

The ultimate meaning to life is not going to be found in these spirits, whom our lowly enemy whispers in our ears to be facets of some godhead.

We are told that all we need in life is to be ‘good,’ leaving aside that all that is good comes from God, not these god wannabes. To deny a distinction between Creator and created is the beginning of enslavement to the worldly, and it becomes progressively easier to keep us complacent in our ‘enlightened’ ways. After all, knowing what we know, we will game the system, getting what we want, convinced this is the same as eternal happiness.

But when the dark comes around, as it inevitably does, Whom do we turn to, when all this time we’ve denied any need of Him?

There is no salvation outside of Him, dear readers. He’s not just one of many cultural ideals, categorizable and negligible in the abundance of alternative spiritualities. But we’re made to suppose that in the new age to come, there’s no room for faith, with the repayment of our karmic debt laid out in such neat, agreeable terms.

To those without faith, this all sounds unnecessarily, insanely rigid. ‘Dogmatic,’ I believe, is the criticism. But if you think us insane, just see how nuts we are and try this out:
Pray. One word. One name.

You may think you’ve said enough of the name for a lifetime. Or you may think you could never say it with any affection whatsoever. Or you may already welcome the challenge of saying it, convinced it is further proof of how contact with your ‘higher self’ in some random form or another, will suffice to attain truth, goodness, and eternal life in God. Regardless of what you assume, say His most holy name, again, and again. Furthermore, do what He tells you. And He will tell you. And at some point, you’ll maybe want to read more about what’s going on. When that happens, write us; we could give you some Bible verses and prayers to start with.

God bless you all.