It’s been a little over a year since I took my first jerky step to believing Jesus is God. Amid a heap of misconceptions to be cleared up in the ensuing months (and in the coming years from now yet), it somehow occurred to me that the man spoken of in the Gospel really did rise from the dead. 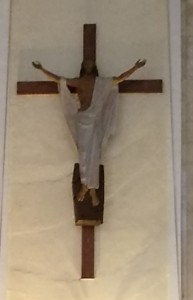 It took another few months to even think of this realization as ‘grace,’ and only because the priest I was talking to said so, so matter-of-factly.

So I thought to look back on times in my pagan life when the Holy Spirit was present, though I didn’t know it at the time.

In 1999, I read Paramahansa Yogananada’s ‘Autobiography of a yogi,’ which I became curious about from the musician Jason Becker. This then led me to the Bhagavad-Gita, which would become my foremost scriptural companion for the next 17 years. But at the time, I was just struck at how little I knew about God and love, and my ignorance in pondering these big things was a moving experience. Little then did I know how Yogananda’s portrayal of the salvation of the cross as a transfer of karmic credit, rather than a perfect act of love by God as man, was a detour from the way, the truth, and the life. For all the yogi’s expressed sympathy for Christ’s mission, most of what he had to say about Jesus, e.g. that He was the reincarnation of Old Testament prophet Elisha*, served only to muddle up things.

* To the extent one takes the doctrine of reincarnation seriously, one turns away from love of neighbor, and is unable to grow from love of self.

I’ve had incredible experiences with music that I could only describe as spiritual, but what came over me one afternoon in March 2002 has no equal. There I was at home listening to Mozart’s Symphony No. 38, ‘Prague,’ and sometime during the first and second movements, my surroundings changed, not in their visual appearance, but in the reality I ascribed to them. “It is so much so!” was how I put it to myself. I was struck at how limited my conception of me was, but had a conviction that whatever existence was all about, had to do with me on a personal level.

That was my most definite experience of the mystical, which unfortunately deteriorated into a point of pride. After all, if I could have such firsthand insight into the nature of things, I must be better than others, right? How many others were sensitive enough to the wonders of musical counterpoint, so as to glimpse the divine? Needless to say, any moral implications of the event were lost on me.

When in college, I heard the ‘Kyrie eleison’ from Bach’s Mass in B minor, I wasn’t particularly wowed by it. It would be over a decade later, and with the help of homages from the band Symphony X, that I began to really listen to what was going on. The slower tempos of Karajan’s and Klemperer’s versions also suited me better than renditions by Herreweghe and Gardiner, whom even now I consider a tad academic and lacking in solemnity.

I suppose it’s fitting that as walls of resistance to the God of Christianity collapsed one by one, I turned from the masonic Mozart to the devout Bach, in particular to his Catholic mass, even though I chalked up such elevated states to his brilliant counterpoint.

And now, I find even Bach’s achievements too aesthetic to commit myself to in a way that I have to the Gospel. It is just as well, and mirrors Kierkegaard’s stages on life’s way.

In 2015, my whole life changed upon reading Julian Jaynes’ ‘The origin of consciousness in the breakdown of the bicameral mind.’ Just read my articles from around that time and a good three years after, to see his influence. But as big of a fanboy as I became, there is one thing I never did accept, and it was Jaynes’ defining of consciousness as a spatialization of time in which one’s “analog I” navigated. Such self-narratization could only be symptomatic of consciousness, and not definitive.

Looking back, I realize that the biggest insight I gleaned from Jaynes, that direct experience is beyond the reach of after-the-fact science, isn’t even found in Jaynes. He doomed himself to a search of the origin of consciousness under a scientific framework, not realizing the inherent conflict in trying to know one’s self through selfless, detached, ‘objective’ science. I now recognize the Holy Spirit’s hand in my escape from the materialism I was persistently clinging to.

This isn’t an extensive list. Suffice to say that His presence and constant care saved my life more than once.

It’s not in our perfection and sinlessness that God reaches us; otherwise there’d be nothing to save us from. I look back at the times when God was the furthest thing from my mind, in my reducing Him to a really expressive figure of speech, and am thankful that He never rescinds the invitations to His banquet. If you’re in a similar place of hardened, weary skepticism, you’re not alone and you don’t have to be.