The past few months have been a wonderful discovery of new music, or recent music I hadn’t heard before. I can’t even remember the last time I had so many good choices to listen to in the car, rather than relying on just one or two albums or artists (which isn’t too bad a situation either). Now, there’s a kid-in-a-candy-store feeling to driving.

I now see that ‘the album’ is no longer the way to listen to an artist’s songs. Sure, the artist could arrange their songs in an order that feels most right to them, but then the listener doesn’t have to keep with that, instead rearranging the songs in a playlist of their own.

Here are the artists, and the Spotify playlists I’ve made of them:

Hey VioLeT – First heard them with the song ‘Break my heart’ last October. It was interesting enough to save the album on Spotify. But then, I really got into them this April, with my favorite songs still being ‘Hoodie’ and ‘Where have you been (all my night).’

Allie X – Apparently, Katy Perry made Allie famous in 2014, but I had no idea she existed until April, when I heard ‘Tumor’ randomly played by Spotify (Thank you, Algorithms, whatever you are!). The song is one of my less favorite ones of hers, but it was enough to arouse my interest in her two albums, of which apparently ‘Collxtion II’ is a stronger work. I love the instrumentation, simple melodies that don’t get tiring within one minute (not even three), and she belts it out like Sarah Brightman (but with better songs).

Great Good Fine Ok – Very little representation of male vocalists in this list, and my favorite musical discoveries of the past decade are of people with vaginas (Taylor Swift, Katy Perry, Ellie Goulding, Carly Rae Jepsen), but the melodies and beats of this group are just very great good fine okay. 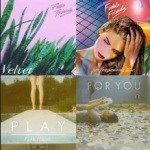 Fickle Friends – Solid songs. It was in discovering the song ‘Velvet’ that I realized what a great age of pop music we are in right now, for which I’m so grateful. I mean, it would be so easy to have never heard of this group.

MUNA – Holy shit. ‘About U’ is the first album in more than a decade that I like all the songs of. The weakest song ‘Winterbreak’ is apparently a favorite of many, and the only reason it’s my least favorite is because the verse reminds me of The 1975, who are okay I guess but all their songs sound the same. And MUNA’s Tegan and Sara collaboration cover ‘Relief next to me’ is better than any Tegan and Sara song that I’ve heard.

Tegan and Sara – I’ve tried listening to their stuff from the early 2000s, but they only get interesting to me when they began working with producer Greg Kurstin in 2013.

Shura – This woman is brilliant. She recreates the 1980s more convincingly and authentically than anyone else I know. It’s only been a week, but I just love her melodies.

Paperwhite – Haven’t really gotten into them, but they sound good.

Betty Who – This artist kept showing up randomly on my Spotify, and I liked what I heard enough to listen to her albums. Just good and happy stuff. She sounds like Katy Perry.

Assorted – This is my playlist for artists whose one or three songs I like enough to want to listen again. My current favorite song is ‘Sing me to sleep,’ which I found out was a big hit two years ago – the YouTube video has been watched 425 million times!

You probably notice my predilection for the 1980s. With the current indie-ish music scene, it feels like the mid-1990s that gave us TLC, the Backstreet Boys, the Spice Girls, etc. (who have their good songs too, to be fair) was a detour and we’re now back on track. In the current golden age, there is renewed emphasis on the power of reverb (not too much though), atmospheric synth, and probably most importantly, creative, atypical melodies uncontaminated by hip-hop, which is not totally a negative thing, though I’m using it in a negative sense here, where rhythm and lyrics take precedence over melody instead of work with it.

After hearing Marty Friedman on ‘Youthanasia’ in 1995, Paul has devoted the past two decades of his life to showing people how to play Marty’s Megadeth solos, as found in paulspurpose.com/mega, which leaves him with very little time for anything else.

The more I watch ‘The wire,’ the more I’m impressed aesthetically, and the more insightful its social commentary appears. David Simon got in the heads of his characters – and there are hundreds of them – better than any other writer did, in any medium. And the show’s sense of humor is unrivaled by any other non-sitcom. The following scenes, to me, are most revealing of the brilliance of ‘The wire.’ It’s difficult to arrange the scenes in order of greatness, so I don’t bother.

“All this death, you don’t think that ripples out? You don’t even know what the fuck I’m talking about.” Omar’s eventual fate is hinted at in this beautiful scene. While Omar remains one of the coolest characters in television history, his moral reasoning – of seemingly only preying on ‘players’ – is ultimately flawed.

After a brief encounter with his old lifestyle, newly-released ex-convict Cutty realizes that his heart is no longer into the game. And Avon Barksdale is left in admiration.

The above heading is a joke of sorts. Slim was giving more of a pep talk to get Avon back into fighting mode, after the death of another member of the organization. War is not about right or wrong, but life or death. Loyalty is such a premium commodity in the game because you need trust in one another to survive.

Snoop was as funny as her scariness allowed it. Amusing in this scene is the varying facial expressions of the store clerk as Snoop goes on with her murderous tale.

It was only on my third viewing of the fourth-season premiere that I came to appreciate Carver for the sympathetic and effective cop he became. In the beginning of the show, Carver was no different than his best pal in the unit, the all-muscle, no-brains Herc. But the ‘Hamsterdam’ experience of season three opened Carver’s eyes to a different approach to communicating with the corner kids in contrast to the usual street nabs. In this easy-to-overlook scene, he bonds with Bodie, Lex, and Kevin through light-hearted ball-busting (“Just words”), thus investing in long-term information extraction. Because, “Bust every head, who you gonna talk to when the shit happens?”

A bonus is McNulty coming in to join in the fun with praise for Bodie’s natural smarts, and Caliccio being a typical asshole.

The best scenes of ‘The wire’ were usually non-action ones, but Omar’s stay in jail is an exception. You could see the overwhelming fear on Omar’s face when left alone, but when it came down to defending himself, he acted very deliberately and left a great impression on the other inmates.

The best thing about the scene is Proposition Joe’s speech. It was like David Simon used Joe as a mouthpiece for all the brilliant metaphors he could think a thug would say, and this is just one of many shows of eloquence that makes Joe my favorite of the mob leaders.

Lester Freamon is a favorite cop of mine on the show, along with Colvin and, more recently, Carver. On little more than somewhat of a side comment by his intellectual opposite Herc, Freamon solves the case of the missing bodies hounding the homicide division for a year. Bunk, unable to keep up, needs some time to take the whole thing in, before uttering the last words of the episode: “Fuck me.”

The scene displays Slim’s ready-to-die warrior mentality, and Omar’s recognition and respect for that, and for Slim’s tight logic.

You root for Bubbles through all his fuck-ups, and this scene appears to be a new beginning for him, after a long adulthood of addiction and petty thievery.

Another viewing and I might be more inclined to favor other scenes. There is an element of subjectivity to this, after all. Hell, after making this list, it occurs to me that I forgot Bunny Colvin’s great paper bag speech, which should be up there! Probably replacing Omar’s visit to Joe. You may notice that I give little attention to seasons one and two, which I love too. But single scenes do not a show make, anyway.

Still, I’d give honorable mention to:

McNulty and Bunk interrogating D’Angelo – Police work is a dirty job, when you consider the need to take advantage of a criminal’s good side to outsmart them; and

Rawls consoling McNulty – Rawls dishes out the worst insults to a guilty, helpless McNulty, whom he detests. Which is actually a rare display of kindness from Rawls.

Plus, there are the popular ‘chess’ and ‘fuck’ scenes which are just a little too contrived for me, but are still very entertaining. Also, as much as I hate watching violence, characters’ deaths were done very classily, and were insightful of the characters involved.

I love watching shows, and of all the shows to name the best-ever, I would nominate ‘The wire.’